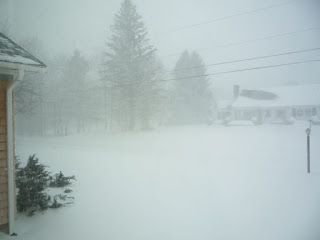 We are finally on the back end of last night's nor'easter, and I think we have a foot or so on the ground. Before last night, most of our snow had melted, which I was glad about. Now they are already talking about another potential nor'easter on Monday/Tuesday. It's really been a very strange winter here in Maine. 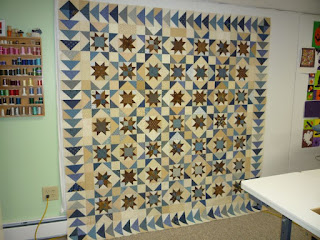 The weeks have really flown by, and progress has been made on several quilts. This one is Stella Blue, by Miss Rosie's Quilt Company, pieced by my dear good friend Koleen. I've mentioned Koleen once in a while on the blog. She passed away last July after a nine-year battle with cancer, and I miss her so much sometimes that my heart hurts. Koleen left most of the contents of her sewing room to our other dear good friend and me. As a consequence, I inherited this top, and I'll return it to Koleen's husband when it's finished. Up close, it's a gorgeous quilt.

Koleen pieced the middle of this top before she passed away, and she made the flying geese units but hadn't sewn them into border strips yet. I had a devil of a time adding them because her quarter inch seam was a less generous than mine, lol. But it's now ready for quilting. 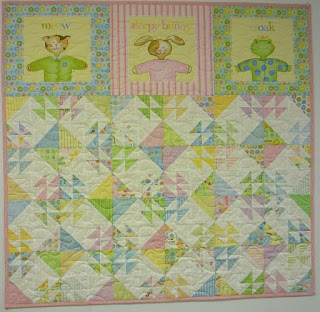 Welcome Home, Baby was my February finish. I bought several packages of those Cake Mix triangle papers, which I think are very clever. I have become a big fan of creating half square triangle units with triangle papers. I usually print my own from the Inklingo software or Brenda Hennings' Triangulations software, but the cake mix recipes were something different and fun.

I also bought some Cupcake Mix papers, which make smaller quilts; and this quilt was made from a block design on the Cupcake Mix #1 package. I had two sets of the block panels, so I'll make another one of these at some point to use the other panel. 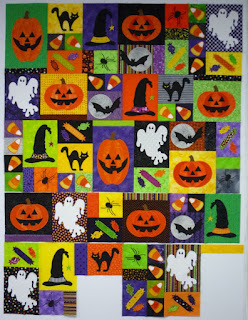 I have two pumpkins left to stitch out for my Halloween quilt, and then I can add the borders and toss it in the RTQ pile. Yay! I enjoy machine embroidered applique, but the prep takes time, so this has been a long slog. 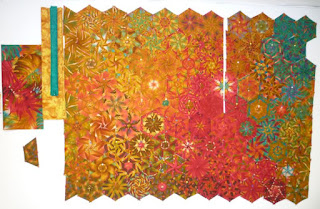 And this is my One Block Wonder, an experiment from Maxine Rosenthal's book of the same name. The stack and whack quilt I finished in January was supposed to have been a workshop last year for my quilt chapter, but it was cancelled due to weather, so I made it on my own. The workshop did occur last month finally, but I wanted to try some other stack and whack project, so I dug this fabric (on the left side of the photo) out of the closet and decided to give it a try. Didn't think I'd like it, but actually, I love it.

I still need to shift a few blocks around along the left and right edges, but I've already started sewing vertical rows with the blocks in the middle of the quilt. Only half the hexagon block is sewn together, then vertical rows are sewn and joined so there are no inset seams.

All of these quilts were new projects, started within the last six months or so. When they're finished, I've GOT to get back to the UFO pile.
Posted by SueR at 8:45 PM 3 comments: Links to this post 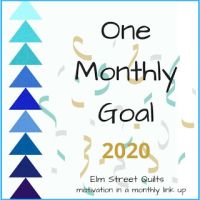 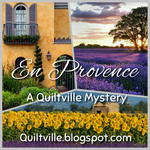